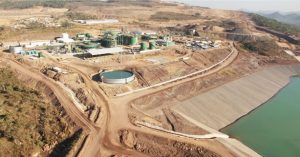 The suspension— according to Paladin officials— was due to a crash in uranium prices following the Fukushima nuclear accident and the mine is now under care and maintenance.

The information is from Paladin Energy’s technical and financial reports submitted to the Canadian and Australian stock exchanges where it is listed, gathered with the help of Aleph, a new tool to search corporate filings by mining, oil and gas companies.

But Bright Msaka Minister of Natural Resources, Energy and Mining in an interview said that such loses are likely since they are no longer in business.

Msaka attributed the loss said by Paladin to payment of salaries to some of the staff at the mine and other equipment maintenance costs.

“From my understanding, this is not surprising at all although the Ministry is not sure of the figure. The company could be making loses because they are not into mining and exportation of uranium due to the suspension,” Msaka said.

Rachel Etter-Phoya and Grain Malunga also took part in OpenOil‘s financial modeling training, culminating in a sprint, to produce a financial model and analysis of Kayelekera using public data by asking “What has total government take been to date and which impact did the reduction in the general royalty rate have?”.

In an interview, Malunga owned the findings, saying their analysis and report was based on audited data which, according to him, was professionally done by Paladin Energy Limited.

“Our findings based on audited data from Paladin Energy are a true reflection o f what the mining company submitted to the stock exchanges where it is listed,” Malunga said.

He said that their model and analysis showed that the mine needs a break-even price of $58/lb to reopen since the October 2016 uranium spot price was $20-26/lb.

The findings also disclose that Malawi’s revenue stands at $12 million to date and that the reduction of the general royalty rate for this project has cost $15 million so far.

“Further reducing the royalty would make only a marginal difference to the break-even price for restarting production,” the report says.

Kayelekera uranium mine is the biggest mining project in Malawi’s history and began production in 2009. In 2013, revenues from the mine contributed 2.6 percent to Gross Domestic Product (GDP).

Currently, Malawi is developing a basket of legal instruments which will include a review of the Mines and Minerals Act and related legal instruments for the sector to protect and ensure proper auditing and contractual negotiations with potential international exploration companies.

Last year, the Human Rights Watch blamed Malawi authorities for failure to protect the rights and livelihoods of people living in nascent mining communities in a report released on the International Right to Know Day.

It said families near coal and uranium mining operations face problems with water, food, and housing, and are left in the dark about health and other risks from mining.

The 96-page report, “ ‘They Destroyed Everything’: Mining and Human Rights in Malawi,” examined the impact of extractive industries on communities surrounding Kayelekera Uranium Mine.

The report is based on research in Malawi from July 2015 to July 2016, including more than 150 interviews, 78 of which were with people living in areas where companies are actively mining or had mining operations in the recent past.