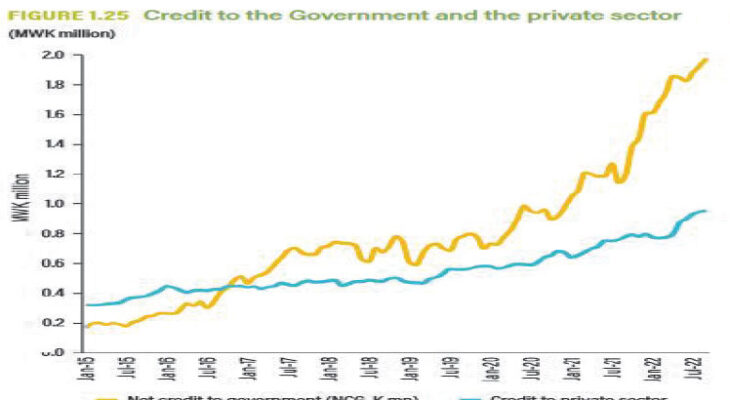 Community, social and personal loans are fast rising, accounting for the largest stock of outstanding private sector credit at 34.3 percent, a development economists say is undesirable for the country’s economy.

Reserve Bank of Malawi (RBM) data shows that the individual loans have, in a space of six months,  rrisen by 3.8 percentage points from 30.5 percent in June 2022 to 34.3 percent of the total private sector credit stock.

This is in contrast to sectors such as agriculture, forestry and fishing and wholesale and retail trade which have, in the same period, declined from 17.6 percent to 15.2 percent, 23 percent and 20.6 percent, respectively.

According to the data, the growth in individual loans has consequently accelerated the annual growth rate of private sector credit to 26.5 percent as of November 2022 from 23.7 percent in October 2022 and 15.3 percent registered in November 2021.

On a monthly basis, the RBM figures show that  the stock of private sector credit increased by K10.4 billion to K1 trillion, following another increase of K25.4 billion in October 2022 on account of  growth in individual household loans.

The trend, which economists have attributed to economic hardships have pushed more Malawians to borrow mostly for consumption, speaks volumes of the country’s deteriorating investment to productive sectors.

According to Catholic University of Malawi economics lecturer Hopkins Kawaye, the current borrowing pattern is not only dangerous for households, who will eventually have to pay back, but also the economy.

“If people are to borrow, let these loans be taken for investment avenues that can give them returns and not purely for consumption.”

On his part, Malawi University of Business and Applied Sciences associate professor of economics Betchani Tchereni said while continued growth of credit to the private sector is positive news, the credit spread gives direction as to where the economy should go going forward.

He said: “Most of these personal loans are used to acquire conductive goods such as electronics, motor vehicles and sometimes for holidays.

“This is a situation which, on the other hand, is contributing to the worsening depreciation of the kwacha. An ideal situation is where we have more investment loans than consumption loans.”

He said: “The composition means there is demand for retail, which means most of our entrepreneurs in the country are into trading and this might involve, to a larger extent, importing of commodities.

“But we need to be moving to areas such as agro-processing and manufacturing as a country.”

Meanwhile, banks have committed to ensuring that they continue to do their bit to invest in productive sectors, but growth has not been significant due to economic challenges.

“We believe we have a role to play in building a more resilient business environment that would easily contain external shocks,” Bankers Association of Malawi president Macfussy Kawawa said earlier.

Other than the individual loans which grew by K13.9 billion, the RBM data shows that expansion in private sector credit was also recorded in manufacturing, which grew by K6.1 billion, financial services by K3.9 billion, transport, storage, and communication by K677.4 million, mining and quarry sectors by K268.3 million and restaurants and hotels by K180.9 million.