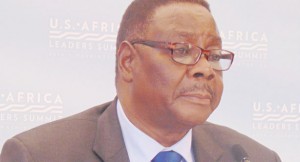 President Peter Mutharika is expected to not only officially open the high profile Malawi Investment Forum (MIF) which starts in Lilongwe Monday.

He will also stay for the discussions before hosting delegates to a dinner at Kamuzu Palace this evening.

Minister of Industry and Trade Joseph Mwanamvekha told a press briefing in Lilongwe on Saturday that the President will participate actively in the forum.

He described it as a big opportunity for the private sector to clinch deals with the foreign companies.

“We have organised this for the local private sector and we expected them to enter into joint venture investments with foreign investors,” he said.

The forum has been described as a defining moment for the country’s business sector as investors, financiers and promoters of investment projects flock to Lilongwe for the first ever Malawi Investment Forum with 55 local and foreign speakers expected to lead various discussions.

The Malawi Investment and Trade Centre (MITC) indicated last week that it expects about US$16 billion worth of prospective investments from the forum.

MITC chief executive officer, Clement Kumbemba said as of Saturday, about 236 local delegates had confirmed participation with 150 foreign confirmations and that this exceeded a combined figure of 300 local and foreign delegated initially expected.

“We are glad to say that we have exceeded the number of potential investors that are coming and these include local and foreign,” said Kumbemba.

MITC also says it has registered 70 bankable projects which add to those in the bankable investment projects, compendium being promoted by government.

About 70 small and media scale enterprises are also expected to showcase their businesses during the two day event.

Africa’s richest man Aliko Dangote from Nigeria is among prospective investors expected to attend the forum.