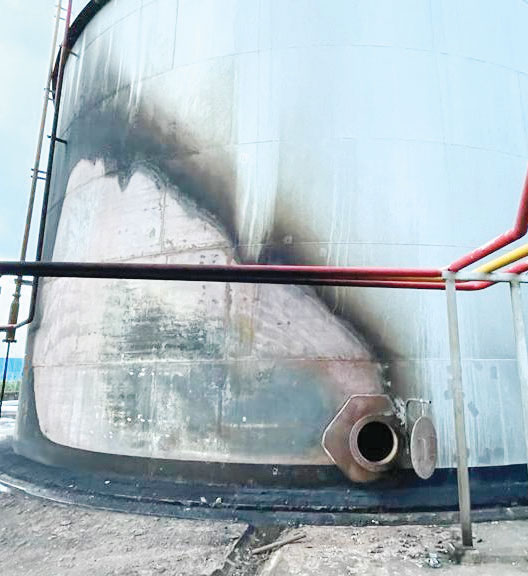 According to a fire incident report in our possession, the fire started around 15:25pm during transfer of deadstock product from one tank to the other to facilitate free venting before attempting to access the confined space.

The report further say the fire was extinguished around 16:00pm. But until around 16:45pm, small quantities of fumes were still coming out of the tanks from the opened manholes, two at the bottom and one on top of each tank.

“After internal investigation and statements from the staff and supervisor on site during the cleaning operations, it was found that the fire started from the pump and worked its way towards both ends of the suction and delivery hoses to the respective manholes.

“It was found that the pump was being operated without being fully bonded or earthed. A combination of short bonding cable and paved tank farm made it impossible to earth without intervention of an electrician. 30 minutes into the operation, static charge built up in the pump with no earthing caused the ignition which combined with petrol and heavy winds caused the fire incident,” the report reads.

In an interview, Petroda Malawi Chief Executive Officer Zubeir Bhana said this should not affect the company’s supply volumes, in the country as its product is bought through Petroleum Importers Limited (PIL) and the National Oil Company of Malawi (Nocma).

“The extent of the damage is not much, however, we cannot immediately advise on the costs,” Bhana said.

Malawi Energy Regulatory Authority (Mera) spokesperson Fitina Khonje maintained that the development will not affect supply of the commodity on the market.

“The fire was contained and operations continue normally and the consumer will not feel any impact,” Khonje said.