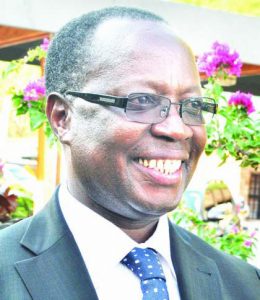 THE Monetary Policy Committee (MPC) of the Reserve Bank of Malawi on Friday agreed to cut the indicative cost of money, technically known as the policy rate, by 200 basis points from 24 percent to 22 percent, a development buoyed by a sharp fall in inflation.

It is the second time in five months that the monetary authorities have slashed the policy rate following a 300 basis point cut, from 27 to 24 percent, in November 2016. Analysts have predicted a continued fall in inflation, with reports of an anticipated bumper harvest this year.

This may propel the monetary authorities to induce more policy rate cuts in the short to medium term. In a statement released on Friday, MPC Chairperson and RBM Governor Charles Chuka said the committee also agreed to maintain the amount of money commercial banks maintain with the central bank without earning interest, technically known as the liquidity reserve ratio, at 7.5 percent.

He said, following the sharp drop in inflation, RBM has adjusted its inflation projection from 16.1 percent to 14.2 percent by June 2017, reflecting seasonal improvement in food supply, stability of the exchange rate and low international oil prices.

“The outlook for inflation in the second half of the year will depend on fiscal outturn for 2016/17 and developments in the foreign exchange market. The Reserve Bank of Malawi has continued to implement a tight monetary policy stance, resulting in money supply growth slowing down from 30 percent in June 2016 to 15 percent in December 2016,” Chuka said.

He further indicates that the development kept monetary expansion in line with nominal GDP growth of about 19 percent in 2016, an indication that inflationary pressures were under control.

According to MPC, economic growth is projected to rebound to between 4 and 5 percent in 2017 from 2.7 percent in 2016, on the back of favourable weather conditions and stable macroeconomic environment. However, the MPC indicated that sustained macroeconomic stability and efforts aimed to address underlying structural constraints were key to continued medium to long-term economic recovery.

Meanwhile, Ben Kalua, a professor in economics at Chancellor College, has said the policy rate slash, though not very significant, is something borrowers should smile about. But Kalua said more needs to be done to bring down inflation so that the cost of money in the banks falls even further. He said Malawi remains an expensive destination in as far as borrowing for investment is concerned.

“Interest rates of around 40 percent are not healthy for any economy as they deter the growth of businesses. We need inflation to go down even further so that interest rates could continue going down. For that to happen, we need serious investments in irrigation so that we can produce two or three times a year and address food inflation,” Kalua said.

In its March 2017 economic report, investment management firm, Alliance Capital, said it expects the country’s inflation to continue on the downward spiral in the coming months as communities harvest their crops.

“Inflation developments are predominantly driven by food, utilities and transport, which contribute about 50.2 percent, 14.7 percent and 6.6 percent to total Consumer Price Index in that order. The fading momentum in food Inflation in December 2016 and January 2017 and the usual seasonal softening of food prices in the coming months improves [sic] the near-term outlook for inflation considerably.

Transport costs are to a large extent influenced by changes in domestic fuel price,” Alliance Capital pointed out.