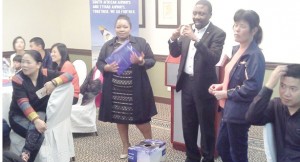 South African Airways (SAA) says it appreciates the support given to the airline by the Chinese business community.

SAA Customer Service Agent Chimwemwe Luwani was speaking in Blantyre on Saturday when the airline hosted a dinner for Blantyre-based Chinese businessmen.

Luwani said the airline has received an overwhelming support from the businessmen on its route from Johannesburg to China.

“The Chinese business community has been an important part of our business in recent years.

“We very much appreciate the support given by the businessmen,” said Luwani.

The dinner saw SAA giving away various prizes to the businessmen.

Li said the businessmen appreciate the punctuality of the airline.

He said, however they, would love to see the meals on the Johannesburg-China route being more Chinese.