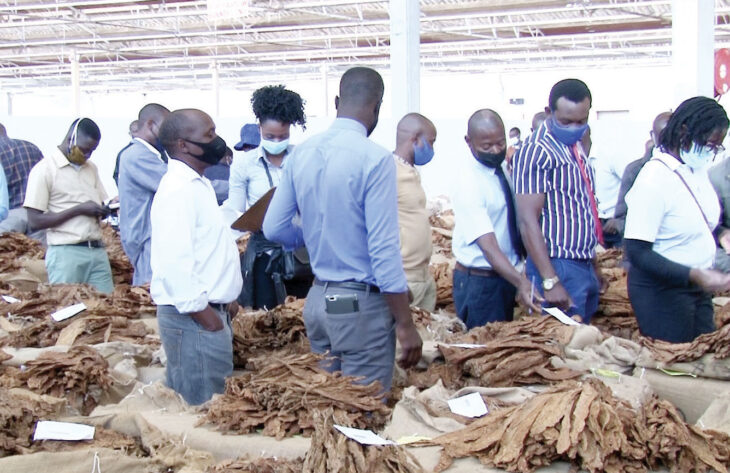 Tobacco sales started on a high note at Mzuzu Auction Floors on Monday as some bales of burley tobacco were bought at $2.40 while flue cured tobacco fetched as high as $4.15.

The onset of the market pleased both the government and farmers, who asked buyers to continue offering good prices for the leaf.

Speaking in an interview after opening the market, Minister of Agriculture Lobin Lowe said he was happy that the rejection rate, especially at auction, reduced from 50 percent last week to around 40 percent this week.

However, Lowe urged farmers to grade their tobacco accordingly to help address concerns of rejection at the market.

“Tobacco that has been rejected has different sizes and is not graded in terms of quality. I believe vendors are still in the field because I don’t think a farmer can mix up the grades like what we have seen. Buyers are taking advantage of the poorly graded tobacco to give minimal prices.

Tobacco Association of Malawi Farmers Trust President Abel Kalima Banda said in a separate interview that the rejection rate could go down if farmers improved on their grading process.

“I have seen other bales which have quality but mixed up with bad grade. This is failing us farmers,” Banda said.

Tobacco Commission Board Chairperson Harry Mkandawire said the buyers have started with good prices but said they role will be working with farmers to ensure that the rejection rate is reduced to less than 10 percent.

During the sales, 2,498 bales were offered for sale. As of Monday, Mzuzu Auction Floors had 3771 bales in stock.

Meanwhile, some farmers we spoke to yesterday at the Limbe Auction Floors complained about the continued rise in rejection rate and low prices buyers offered for the leaf.

One of the farmers Felix Beston wondered why a bale would fetch $1.80 on the contract market and another of similar quality be sent back on the auction market.

“The government should intervene in our situation that at least the buyers should start buying significant quantities of tobacco on the auction market according to the promise the Minister of Agriculture and the President made when opening the market this year,” Beston said.

Another farmer Lordrick Nselema said shrinking of prices on the contract market was worrisome as they expected the prices to be picking up as the market progresses.

Spokesperson in the Ministry of Agriculture Gracian Lungu said they were aware of the situation and stakeholders were doing everything possible to help the farmers.

“We are contemplating starting the contract market before opening the auction market so that all buyers participate in auction market,” Lungu said.

Meanwhile, at the end of the third week of tobacco sales last Friday, the country had realised $25 million from the sale of 15 million kilograms (kg) of tobacco at an average price of $1.66.

According to figures from AHL Group the earnings have grown by 38.8 percent when compared to the $17.9 million realised at the end of the third week.

The tobacco volumes reaching the market have also increased by 30 percent this year compared to 11.5 million kg last year.

The tobacco industry has been facing pressure from declining demand on the international market, perpetuated by the anti-smoking campaign championed by the World Health Organisation.