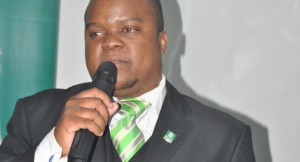 A Salima-based man has emerged as the winner of a K1 million cash prize in the second draw of the Carlsberg Wachiona Ndani promotion.

The draw, held at Carlsberg head offices in Blantyre, also saw the beer maker giving away K500,000 and K250,000 to the second and third winner. Michael Mtilatila, who works for Malawi Mangoes in Salima, could not believe his luck when informed by Carlsberg officials about his winning of the K1m prize.

“Oh my God, this is too good to be true,” said Mtilatila. Carlsberg Malawi Senior Brands Manager for Alcoholic Beverages Twikale Chirwa said the firm is impressed with how the promotion is progressing.

“The promotion has so far attracted 43,000 entries and has pushed up sales volumes by 3 percent although we only introduced it as one way of giving back to customers,” said Chirwa.

The draw also saw Carlsberg giving away a fridge, a cooker, a laptop, a  Play Station 4 game and other prizes.

To enter the promotion, a customer has to buy a Carlsberg Green, Stout or Special and redeem the prize found under the crown cork at the nearest Carlsberg depot in Blantyre, Lilongwe or Mzuzu.

Customers can also participate by sending an SMS of the unique code found under the crown cork to 4040 on TNM lines and to 54040 on Airtel. The grand prize in the promotion is K5 million.