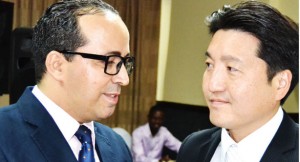 SBT Enterprise, one of the marketing companies of SBT Japan, is celebrating a first anniversary since it started its operations in the country and officials of the company are describing their operation in the country as very successful.

An SBT official from Japan, Daigo Hamaguchi, who visited Malawi as part of the celebrations, said the company wants to make Malawi its hub for the region.

SBT Enterprise General Manager in Malawi, Ahmed Lamtaouat, said as part of the celebrations, the company will provide special offers by providing cars at lower prices to customers.

He said the company has been established in Malawi to market to Malawians top range vehicles at affordable prices.

Lamtaouat said the company will open marketing offices in Lilongwe, Blantyre and Zomba.

It will also have new services of clearing and delivery starting from Dares Salam to Songwe border as well as to all Malawian cities and towns.

“SBT Malawi is answering all customers’ enquiries both in Chichewa and English languages by phone call, email or personal visit,” said Lamtaouat.

The company, said Lamtaouat, has been in the car industry for many years with international experience as well as two awards under it’s belt while working in Japan and Australia