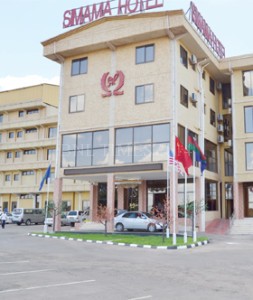 Management of newly constructed Simama Hotel in Lilongwe, which is yet to be commissioned, on Friday took the media on a tour of the facility which touts itself as a unique hospitality establishment in the country.

Briefing the media after the tour, hotel manager James Bottoman declared that the hotel is the only hospitality facility in the country which has Sauna and Steam facilities besides a state-of-the art gym and message parlour.

The hotel also boasts of a unique ICT facility that allows residents to order anything using the specially designed gadgets and a TV screen that is also doubling as a computer screen and processor that allows customers to check their outstanding bills and buy special movies in addition to free ones on offer.

“Besides these facilities which go together with the highly expensive accommodation facilities and room furniture, the hotel’s prices are targeting the local market because it is wholly owned by a Malawian,” said Bottoman.

Each of the hotel’s 39 superior rooms is being charged at K29,180 a night, while the seven deluxe rooms are at K34,000. Four Executive rooms that are installed with a Jacuzzi each are at K42,000.

“Of course the charge is at a promotional rate up until February 2015 but we will not be exorbitant to the point that will make the facility out of reach for Malawians,” he said.

He called on Malawians to come in their large numbers and patronise the hotel.

“The advantage of supporting this hotel is that it will not be taking forex outside the country since all the directors are from Malawi,” he said.

Bottoman also hailed government for offering them a duty waiver for some hotel materials.

The hotel, whose owner is renowned businessman Abraham Simama, has employed 65 Malawians and is currently operating at 75 percent.

“Once we hit the ground, more people will be employment at the hotel,” he said.