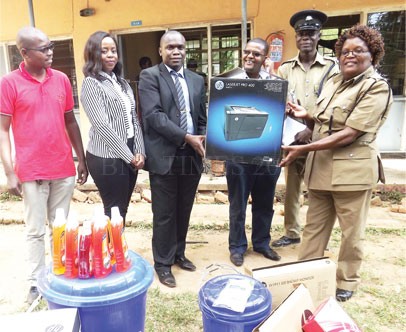 Computer services firm Sparc Systems Limited has made a donation of two desktops, a laptop, a printer and other resources to Soche Police valued at K2 million.

He said it was important for the business community and other sections of society to undertake everyday business without worrying about crime, hence the move to offer the assistance.

“I remember four years ago, I came here to report a certain incident and it took the police five days to produce a printed report. I was shocked when I encountered a similar problem recently. That is the reason why we did not hesitate to offer our support when we were approached,” he said.

Assistant Commissioner of Police Eunice Mwamkili, who is also Soche Police Officer-in-Charge, thanked Sparc Systems for the donation describing it as timely as it would help them improve their service.

“Sparc Systems has lifted us to another level. We are overwhelmed by the donation. I have been here for three months and our service delivery wasn’t satisfactory because we lack critical equipment to carry out our work as we should,” she said.

Mwakili then asked other organisations to emulate Sparc’s gesture, saying the Police were at times delaying to respond to emergency calls because of lack of fuel.