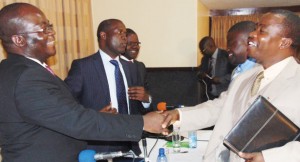 A debate the Office of the President and Cabinet (OPC) hosted in Lilongwe on Monday night to discuss the prospective sale of Malawi Savings Bank (MSB) showed that there was consensus in support of disposal of the bank.

However, this is on condition that government increases transparency on the matter by sharing information publicly in full as well comes up a convincing means of recovering toxic loans.

Other discussants suggested that government should invite fresh bids for acquisition of the shares in the bank and that it should not be offered to another bank as that would reduce competition on the market.

However, Public Private Partnership Commission (PPPC) chief executive officer, Jimmy Lipunga, pleaded with the stakeholders to prevent derailing the process of finalizing the recapitalisation of MSB any further as that could have serious consequences on the bank.

“We cannot afford to delay the process any further,” said Lipunga.

He also advised against re-tendering the process.

The debate, which was broadcast live on MBC and Zodiak radio stations, attracted representatives of various stakeholders, including opposition parties, civil society organisations as well as those from several business and professional groupings.

During the debate, the majority of the panelists as well as audience members said they generally supported the idea of recapitalization of MSB through private sector involvement but faulted the government for lacking transparency and accountability in the process.

Chancellor College economics professor, Ben Kalua, said the question was not about whether to sell MSB or not but how the process has been handled.

“The process has to be credible for people to be satisfied that everything is being done in good faith,” said Kalua.

MCCCI chief executive officer, Chancellor Kaferapanjira, said the private sector supports the sale of MSB but that there were general concerns about the recovery of bad loans as well as how the disposal was being handled.

“The worry is about how and who the bank is being sold to,” said Kaferapanjira.

Economics Association of Malawi (Ecama) president Henry Kachaje also said it was in the best interest of the economy for the controlling stake of MSB to go into private hands but pointed out that politicians should not be allowed to go away with unpaid loans to the bank.

Bankers Association of Malawi (Bam) executive director, Lyness Nkungula, said all banks have an obligation to meet regulatory requirements and that MSB was not an exception.

She said recapitalisation of MSB would ensure a level playing field as well as protect general interests of the financial market.

Malawi Congress Party (MCP) parliamentary spokesperson on finance Alexander Dzonzi said the opposition in the national assembly were irked that government wanted to sell shares in MSB without consulting members of Parliament.

“Parliament has to be involved because we represent the people,” said Dzonzi

However, civil rights activist Billy Mayaya was adamant in the opposition to the sale of MSB, saying government should recapitalise it using budget resources and that if anything, the shares should be sold to members of the general public through the Malawi Stock Exchange in three years.