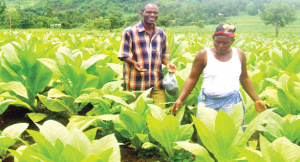 Some tobacco farmers in Lilongwe and Tobacco Association of Malawi (Tama) are engaged in a tug of war over delays to transport tobacco to the auction floors.

The farmers, who are from Kasiya, have faulted Tama for not sending vehicles to their depot to transport their tobacco and fear they may not be able to sell their tobacco as the tobacco market is scheduled to close soon.

The farmers claim they have in stock 1,000 bales.

One of the tobacco growers in the area, Lazaro Banda, said their major concern is that their tobacco is losing quality.

“Tama has not been sending vehicles to transport our tobacco at this deport. Most of the tobacco is losing quality because it has been at the depot for too long. This means that even if it is transported to the floors, we are going to get lower prices because of the poor quality,” he said.

He further added that their families mostly depend on the leaf hence the delay is worrisome.

“The development is greatly affecting our lives because we depend on tobacco for survival. As of now, we are failing to send our children to school because we have not sold any tobacco yet,” he lamented.

Another farmer, Tita Kawindira, said their major concern is that the market is scheduled to close soon yet Tama is not sending vehicles to transport their tobacco.

Our major concern is that vehicles to transport our tobacco are not coming. Tama is not sending the vehicles. The tobacco we have here require almost seven vehicles for the tobacco to be transported to the auction floors. We are heartbroken,” he explained.

Tama Spokesperson, Sam Kalimba, confirmed that there is a problem but attributed the development to the introduction of a new system introduced by the Tobacco Control Commission(TCC) which caused transporters to shun away from transporting tobacco.

“It is true. The main issue is that transporters shunned the tobacco industry when TCC introduced a system of per kilo per kilometer rather than when they were just charging the transporters per bale because of that many transporters opted out for other commodities rather than tobacco,” he said.

Kalimba further urged transporters to link up with their logistics department if they have road requirements.

“We have few tobacco transporters that remained and with the bumper harvest and over production that we had, the number is not adding up. We are appealing to transporters to link up with us to transport these bales especially those from the areas where there is still a lot of tobacco,” he said.