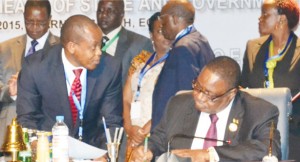 African heads of state on Wednesday launched what has become the largest free trade area across Africa, the Tripartite FTA (TFTA), during the Third Tripartite Summit held in Sharm El Sheikh, Egypt.

President Peter Mutharika was among leaders who put pen to paper to mark the beginning of the “Grand” FTA which stretched from Cape Town to Cairo, creating an integrated market with a combined population of almost 600 million people and a total Gross Domestic Product (GDP) of about US$1 trillion.

The trade area will come into effect once ratification is attained by two-thirds of the 26 member states.

Minister of Industry and Trade Joseph Mwanamvekha said, however, on Monday that although Malawi has sign the TFTA agreement, the country will not start trading under the accord immediately until some issues of concern to the country are addressed.

Bridges Africa – an online Africa trade publications, says issues that are likely to delay various countries’ ratification of the FTA could most likely included rules or origin, trade remedies and dispute settlement – and the programme of work on the movement of business and the industrial development pillar.

The launch of the TFTA is widely seen as the first step towards a more ambitious plan of establishing an African Customs Union by 2019.

Observers note that such a large FTA will be an important step towards a potentially game-changing environment for Africa’s trade and integration.

The various regional FTAs are expected to be consolidated into the Continental FTA, with the pan-African pact launching in 2017 and a continental customs union forming by 2019, according to a roadmap released by the African Union in 2011.

The move was hailed by business leaders during the World Economic Forum (WEF) on Africa held last week in Cape Town, South Africa, where participants highlighted the current low level of intra-African trade, currently standing at around 12 percent compared to some 55 percent in Asia and 70 percent in Europe.

They decided that countries that had not yet exchanged tariff offers would need to do so within the next 6-12 months; those that have exchanged and are negotiating tariff offers should endeavour to conclude that process within 12 months.

Bridges Africa says one of the key challenges involves finding an acceptable framework for rules of origin since Comesa and EAC regimes have significantly different rules of origin from the one used by Sadc.

Observers who have been following the process expressed their satisfaction regarding the launch, while still maintaining some reservations on the actual implementation process that will follow.

Some observers say such an ambitious integration agenda will prove difficult to operationalise given the various integration challenges facing African countries at the level of their RECs, and the envisaged timeframe.

However, if well implemented, the TFTA could become a means to enhance economic inter-linkages and create an enabling business environment that unlocks regional potential, scales up productive capacities and competitiveness, and stimulates the emergence of value chains.

According to the AU Action Plan for boosting intra-African trade, the projected CFTA would increase trade within the region by at least 25-30 percent in the next decade.

The business community is also expected to benefit from an improved and harmonised trade regime. As a result of eliminating overlapping trade regimes, the TFTA will ultimately reduce the cost of doing business, a factor which currently constitutes a complexity in Africa’s regional arrangements.