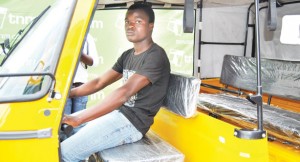 Mobile phone company, TNM, has extended its Tikolore Promotion by another month and the promotion will now run up to August 31, 2015.

TNM marketing manager Madalitso Jonazi said this when he presided over the presentation of a tricycle prize won by the company’s Thyolo-based customer Manuel Nehiya.

Jonazi said the promotion has so far registered success and has offered encouragement to the company to extend it to allow more customers enter and win.

“We‘ve seen that our customers are appreciating the prizes that we have been giving away,” Jonazi said.

He said the number of customers that are participating and qualifying for the weekly and monthly draws keeps on increasing.

By last week, Jonazi said the company had given away eight tricycles and other assorted prizes which include farming tools as well as bags of fertilizers and sprayers.

In addition to main prizes, TNM subscribers also stand a chance to earn 50 percent bonus of their daily airtime recharges vouchers during the promotion. To win, TNM customers are asked to simply recharge with a minimum of K50.

Neiya, who has just written MSCE exams, was all excited when Jonazi presented the tricycle to him.

“I am very excited because this is the first time to happen in my life,” he said.