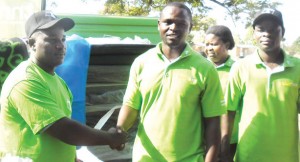 One of the winners in the TNM Ufulu @50 promotion Abdulla Genda has spent his K2 million prize on 50 mattresses, blankets, beds and mosquito nets for special needs pupils at Nkhotakota LEA School.

Previously, the pupils slept on the floor, with some without beddings, according to head teacher Bright Kambewa.

He was speaking during the presentation of the materials at the school on Thursday last week.

Genda, who comes from the area, said he was touched by the plight of the children at the school and had wanted to bring a difference to their lives but was limited.

And when he won the TNM prize, he took it that God had shown him the way to help his brothers and sisters.

“It had always been my desire to play a part in helping the school meet the needs of the pupils,” said Genda.

TNM regional distribution manager for the north Yamikani Bakuwa said the company was satisfied with the projects that have been handed over so far as they have spread across all social fabrics of the society.

“The handover of these materials demonstrates our company’s commitment in fulfilling our promises to customers in Nkhotakota and the rest of the region,” said Bakuwa.