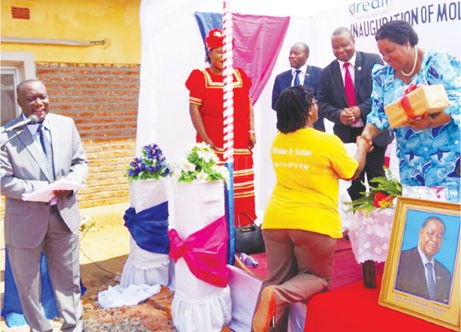 Total Malawi has handed over a laboratory and solar hybrid system to Dream Centre in Balaka to, among other things, enable the centre integrate HIV and Tuberculosis testings.

Minister of Health Jean Kalilani received the equipment on behalf of communities in the district at a ceremony which took place at the centre in Balaka.

Total Malawi managing director, Michel Malatino, said their donation to the Dream Centre was part of an arrangement between Total Foundation and the Saint Egidio Italia under which Total committed to provide support to Saint Egidio Dream centres in Malawi.

He said under this arrangement, Total has provided 380,000 euros worth of solar systems in Dream centres such as Mtengo Wamthenga in Lilongwe, Balaka, Dedza and Mangochi.

She said the 130 000 euros Balaka Dream Center laboratory is the second best largest state of the art lab after the one at Zomba Central Hospital.

Kalilani said the collaboration between Total Malawi and Dream will help in the fight against the HIV/Aids and TB.

“Better treatment is a result of better diagnosis that is well informed by better laboratory examination,” said Kalilani.