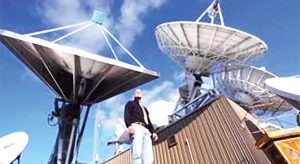 As Mary Mbaka tended to crops on her farm in central Kenya, she wondered if she could rely on recent heavy rains to keep them watered, or if she should be preparing for a dry spell.

“The weather is quite unpredictable,” she said.

Mbaka, like many farmers across the country, still uses traditional weather forecasting techniques to decide what to plant and when on her land in Kamatungu Village.

For years, the 52-year-old planned her harvest according to past weather patterns and looked for signs in local wildlife behaviour—such as a shift in the rhythm of the nightly frog-croaking— to tell her when rain is coming.

Recently, those methods have proved unreliable and Mbaka has lost crops to unexpected dry spells and unusually heavy rains.

Accurate forecasts “would be of great use to me”, Mbaka told the Thomson Reuters Foundation.

In fact, the up-to-date weather information she needs is readily available from the Kenya Meteorological Department.

But about a third of the country’s farmers do not use the national weather service to help them plan and protect their crops, according to Danson Kigoro Ireri, director of meteorological services in Tharaka Nithi County.

“Most farmers are still not ready to take up the accurate scientific information conveyed by the met department,” he said.

Some complain it is too difficult to find or too hard to understand. Others refuse to believe the forecasts are more reliable than the methods they already use.

Farmers, who make up nearly 40 percent of Kenya’s working population, leave themselves vulnerable to the potentially devastating effects of extreme weather by relying solely on traditional prediction methods, said Ireri.

Research by the meteorological department and local non-profits shows farmers who use weather information can increase their crop yields by between 50 and 70 percent.

But the department is struggling to get that information to the farmers who still trust customs over science, Ireri said.

Although weather forecasts are broadcast over the radio and in local newspapers, limited media reach and high illiteracy rates mean farmers in many rural areas miss out.

Ireri pointed to language as another major barrier.

There are over 60 languages spoken in Kenya, but weather reports are available only in English and Swahili, making them inaccessible to a large part of the rural population.

“It’s a problem that cuts across nearly all the counties,” Ireri said.

The meteorological department tries to address that problem by having translators accompany the agents it sends into villages monthly. They hold forums where they share forecasts and tips on how farmers can prepare for the coming weather.

If the forecast flags a dry spell coming, the agents might suggest farmers plant drought-tolerant or early-maturing crops such as millet or sorghum, Ireri said.

But budget constraints mean there are not enough translators to cover all the areas the agents visit, he added.

Farmers who can access weather information sometimes say the terminology is too broad or too complicated.

Forecasts for an entire region are little help to farmers who only need to know how the weather will affect their own plot, said Joyce Kananu, 46, a farmer in Chiakariga ward in the same county.

“I am only ever told about a vast region, and I don’t know what to do with that,” she said.

She needs information that will help her know if her area will get sufficient rain or is facing a prolonged dry period —“so I can be in a position to plan”.

When farmers do decide to try using the meteorological service, one inaccurate forecast is enough to turn them off for good, said Lawrence Marangu, local coordinator for the government’s Agricultural Sector Development Support Programme.

“The information might come too early or the weather might not necessarily be what was predicted,” he said.

“Farmers …tend to believe their traditional forecasts more than the met (office).”

Ireri, the county meteorological services head, would like to send more agents and translators into rural areas to stress the reliability of the forecasts and train farmers in techniques to help them cope with extreme weather —but funds are tight.

Still he sees signs that future farmers may get the message.

While the older generation is reluctant to change methods, younger farmers are more concerned about environmental issues and have more faith in modern forecasting techniques, he noted.

They bring back forecasts, and urge him to take the crop advice from the meteorological department agents.

But usually Njeru does not listen to their recommendations and prefers to predict the weather the same way he always has.

“I have been farming all my life and I often do not agree with much of what they advocate,” he said. “I won’t allow them to dictate to me what to plant and what not to plant.”— Reuters