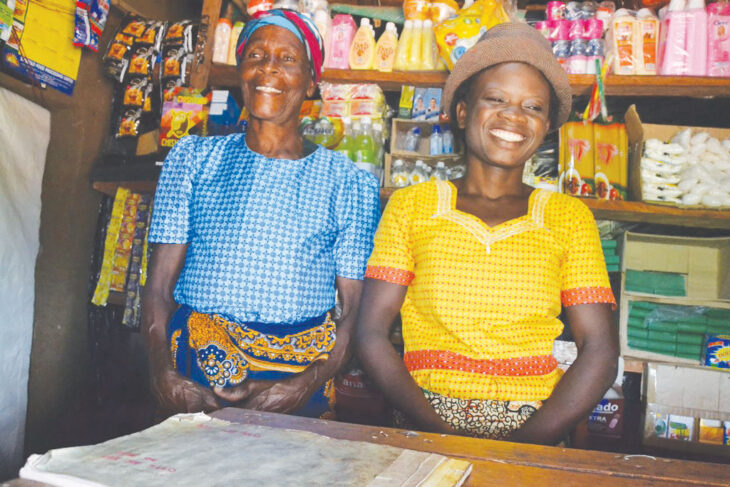 Esther Kacheta, a 34-year-old single mother of four, is geared to make history as the first resolute and fearless woman in the remote village of Mkumphira in Traditional Authority (T/A) Mkukula in Dowa District.

“It has never happened before that in my village a woman, let alone a school dropout, could face head-on the challenge of raising four children singlehandedly and move towards gaining economic independence like Kacheta,” testifies Group Village Head (GVH) Mkumphira.

Before exchanging marriage vows with her now estranged husband, Kacheta had dropped out of school in her early stages of primary education due to lack of support from her parents.

And with no proper government systems to support her education, she opted to marry with the hope to build a happier home with her then prospective husband.

But it never worked! The marriage fell apart a few years after the take-off. The estranged husband left her with nothing to start from.

“Everything crumbled for me! I didn’t know where to start from. I didn’t know how I would take care of the four children alone,” Kacheta recalls.

Malawi, just like many other countries across the world, is facing challenges to empower her largest ever young population, particularly girls and young women, and to provide them with opportunities to realise their full potential.

The African Parliamentary Forum on Population and Development (FPA) states that the imperative to empower girls and young women calls for crucial and sustainable investments into their needs – their healthcare, education – and of course, ensuring that they have access to modern contraception to allow them to take charge of their own future, and also help to stabilise the fertility rate.

However, it should be emphasised that this also implies an increased spending into crucial social needs such as healthcare, education and sustainable agriculture, which will not only have a knock-on effect on the physical health and education level of citizens, but open up a whole new world of possibility for them.

From 2015 to 2019, Development Aid from People to People (Dapp) implemented a project to empower women farmers in Dowa in an effort to help fast-tracking the realisation of the African Union Agenda 2063.

Currently, the project is under the post-implementation phase and it is building the capacity of women farmers to diversify into livestock production and drought-tolerant crop types like small grains and adopting early maturing crop varieties.

And through a pass-on programme, the women farmers have not only diversified into livestock production, but they have also opted for drought-tolerant livestock like pigs.

So far, the women farmers have formed five clubs with each comprising 10 members.

Kacheta belongs to Tiyanjane Farmers Club, which is found in GVH Mkumphira. She got one pig from the programme, which she raised.

To date, the pig has multiplied to 18 pigs and Kacheta is optimistic that the figure will continue to grow. Of course, she gave out some piglets to other members since this is a pass-on programme.

“I have also sold a number of pigs whose proceeds I used to buy farm inputs, school uniforms and notebooks for my children so that their education is not disturbed. Rearing of these animals has also given me the opportunity to make manure for application in my farm to improve soil fertility. This helps me achieve decent harvests,” she says.

Kacheta has also joined the local Village Savings and Loan Association (VSLA) where she is buying shares using proceeds from sale of the pigs.

Every December, she receives a substantial amount of cash in profit. Kacheta says the profit she makes through VSLA is enough to enable her buy food items and meet school needs of her children during the lean season.

“Of course, challenges do not fail in life! But I must admit that things have improved for me. I am now able to feed my children without much struggle as it used to be the case before,” says Kacheta.

An octogenarian Maria Meya is another beneficiary of the pig-pass-on programme in GVH Mkumphira.

With proceeds from sale of her pig, and interests earned from her shares at the VSLA, Meya ventured into grocery business some two years ago.

“This is the only reliable grocery in this village. I sell in excess of K50, 000 per day. I try to stock the items that people need, which helps me make more sales and, in turn, make a considerable profit,” she explains.

Meya has also introduced subsidiary businesses such as mobile money service – Airtel Money – and a shabeen right at the corner of her house.

Her daughter, 27-year-old Loveness Chauwa, says in the next one year, the family intends to open a bigger shop, which will stock more grocery as well as other non-grocery items.

“We want this to be a one-stop centre where the villagers can find groceries, farm inputs, a barber’s shop and many other services. We are very confident, as a family, that this will materialise,” Chauwa muses.

GVH Mkumphira says the project has been very critical in empowering women in his area not only to achieve economic independence, but have also managed to become food-secure.

The traditional leader adds that the majority of the resource-poor farmers who are heeding the call to diversify their agricultural practices have completely changed their farming practices and seem to be adapting to adverse impacts of climate change.

“And this is very good. My role as a traditional leader has generally been to encourage them not to falter in all their activities,” he says.