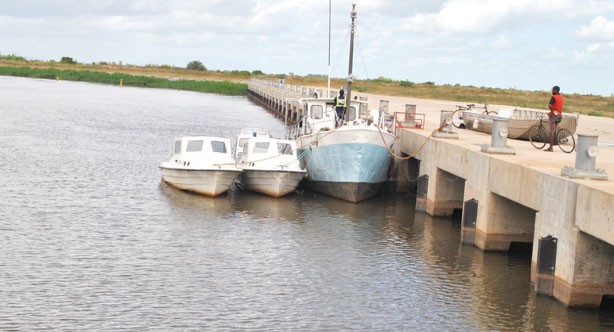 The African Growth and Opportunity Act Civil Society Network in conjunction with the Foundation for Democracy in Africa have committed to work with the Malawi government to ensure the completion of the Nsanje World Inland port which late President Bingu Wa Mutharika initiated.

President of the foundation Fred Oladeinde and his Chief Executive Director Patrick Fine said this after meeting President Peter Mutharika in the US. Fine said he sees the project as Malawi’s gateway to economic recovery.

He added that the project would help in efforts to integrate Africa into a global economy.

“The Nsanje port will be important in terms of unleashing the potential of Malawi as an export country. We are looking forward to re-engaging with the government on how we as an organization can support this project to make it a success.

“Our mission is to create tangible incentives for African countries to implement economic and commercial reform policies especially in infrastructure projects, which will contribute to a better market opportunities and stronger commercial partners in Africa for US companies.” said Oladeinde, who is also the executive member of the

Asked on the link between democracy and the issue of the Nsanje port, Mr Oladeinde had this to say:

“Democracy is key in terms of citizen engagement and in the final analysis economic empowerment is what makes a nation prosperous and also allows citizens to become very committed.”

He said that was why Foundation for Democracy works to ensure that citizens are kept within the system.

“By integrating democracy with issues of economic empowerment, we keep citizens within the system, so we spend a lot of time in making sure that democratic principles are in place,” he added.

“We also want to see small and medium enterprises blossom so that as citizens get committed and converted to political freedom, they can also be part of the economic prosperity of the nation.”

In his remarks, President Mutharika said the feasibility study on the project had already been completed and that the Southern African Development Community, the main implementing partner, would meet soon to give a report.

“There are several other activities that we intend to do to finalise this project and currently the African Union, the World Bank and seven other African countries who will benefit from this port are already supporting it,” he disclosed.

The Nsanje World Inland Port was late President Bingu wa Mutharika’s dream in which he planned to connect Malawi to the outer world by connecting Shire and Zambezi Rivers to the Indian Ocean.