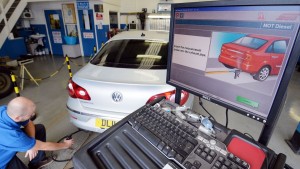 Olaf Lies, a Volkswagen board member and economy minister of Lower Saxony has told Newsnight some staff acted criminally over emission cheat tests.

He said the people who allowed the deception to happen or who installed the software that allowed certain models to give false emissions readings must take personal responsibility.

He also said the board only found out about the problems at the last meeting.

About 11 million diesel engine cars are affected by the problem.

Mr Lies told the BBC: “Those people who allowed this to happen, or who made the decision to install this software – they acted criminally. They must take personal responsibility.”

He said: “We only found out about the problems in the last board meeting, shortly before the media did. I want to be quite open. So we need to find out why the board wasn’t informed earlier about the problems when they were known about over a year ago in the United States.”

Mr Lies said the company had no idea of the total bill to sort out the engines and cover any legal costs arising: “Huge damage has been done because millions of people have lost their faith in VW. We are surely going to have a lot of people suing for damages. We have to recall lots of cars and it has to happen really fast.”

He added that the company was strong and that rebuilding trust – and ensuring the majority of the 600,000 workers at the car giant were not blamed, was its priority.

He added his apology to those already made by senior company figures and said: “I’m ashamed that the people in America who bought cars with complete confidence are so disappointed.”

VW is working out how to refit the software in the 11 million diesel engines involved in the emissions scandal. Seat is the latest VW brand to reveal it, too, used the emission cheat device.

Broken down brand-by-brand they are:

VW said it would inform customers “in the next few weeks and months” about how refits would take place.

The scandal is continuing to hit VW’s share price. On Tuesday it fell another 1.5%during morning trade in Frankfurt. The company has lost 35% of its market value since last Monday.

A survey of 62 institutional investors, by the investment banking advisory firm Evercore, showed 66% of them would not invest in VW for six months or until it clarified what costs, fines, and legal proceedings it faced.

The effects are also spilling over into the local economy around VW’s headquarters in the German city of Wolfsburg. The city is expecting a fall in business tax revenue from VW and the mayor has announced a budget freeze and hiring ban on public sector workers.

The scandal was revealed after the US Environmental Protection Agency (EPA) found that some VW diesel cars were fitted with devices that could detect when the engine was being tested, and could change the performance to improve results.

Volkswagen, the world’s biggest carmaker, has apologised for breaching consumers’ trust. On Friday it announced that Matthias Mueller was replacing Martin Winterkorn as chief executive. Mr Mueller promised a “relentless” investigation to uncover what went wrong.

He said the group was “facing the severest test in its history.”

German prosecutors said on Monday they were conducting a criminal investigation into Mr Winterkorn.