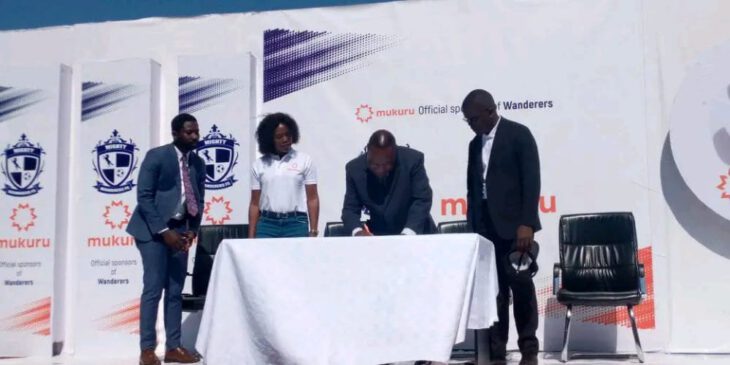 “We thank Mukuru for choosing Mighty Wanderers as a team to sponsor,” said Stambuli.

“We have been without a big sponsor since December 2020, so the coming of Mukuru will help us a lot.”.

He added that they are still looking for other companies to collaborate with Mukuru to ensure that the club is fully sponsored.

“We thank FAM President and his administration for helping us coming into marriage with Mukuru,” said Stambuli.

Mighty Wanderers board Secretary Humphreys Mvula said he was very happy that the deal has finally been sealed after a long time of waiting and suffering following the departure of Be Forward in 2020 December.

Mvula revealed that playing good football and prudence in the financial management are some of the terms placed on the table by Mukuru.

Nyamilandu also requested the Wanderers family to be united.

Nyamilandu said:  “With the arrival of Mukuru,  I urge Mighty Wanderers to grow as their neighbors have grown up after sealing the sponsorships.

“We are delighted to have secured the deal and that our efforts have paid off . When approached by Mukuru, we identified club sponsorship as one of critical needs that has to be addressed and recommended to Mukuru to sponsor Wanderers .

“We have been working behind the scenes with Wanderers to frame a viable value proposition and to negotiate a suitable sponsorship agreement for both parties.

“We are impressed by the passion shown by Mukuru and we warmly welcome them to Malawi football. We strongly believe that they have made the right decision to invest in Wanderers and that the spin-offs will be huge as they leverage on the massive fan base of Wanderers,” he said

Nyamilandu further urged Mighty Wanderers supporters to be united and wash away the tendency of wanting to benefit from the team.

He added that Mukuru are also looking to benefit from the deal and they won’t be happy to see their reputation being tarnished by supporters.

Mukuru has secured the naming rights that will see the team being called Mighty Mukuru Wanderers.

The coming of Mukuru has also forced Mighty Wanderers to dump their traditional colours,  Blue and White, and start using orange as their home kit.  Their bus has also been rebranded to orange and the name of the club has also been changed to Mighty Mukuru Wanderers.