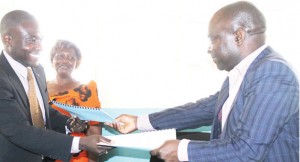 After years of continuous loss making and failure to qualify for a new operational licence, the Zomba Teachers Sacco has disbanded and has now joined the Thyolo Teachers Sacco.

At the signing of a merger agreement in Zomba on Thursday, the two Saccos resolved to maintain the name Thyolo Teachers Sacco until an annual general meeting due next year decides otherwise.

Thyolo Teachers Sacco president, Amos Mukhonya, said the Zomba Sacco has been taken on board and will form part of the growth of the Saccos.

At the time of disbandment, the Zomba Sacco was in debts in excess of K5 million which will also be transferred to Thyolo Teachers Sacco.

Musco business development manager, Ezikiel Thindwa – who graced the occasion, said the merger would help in the sustainability and quality of service delivery to the members.