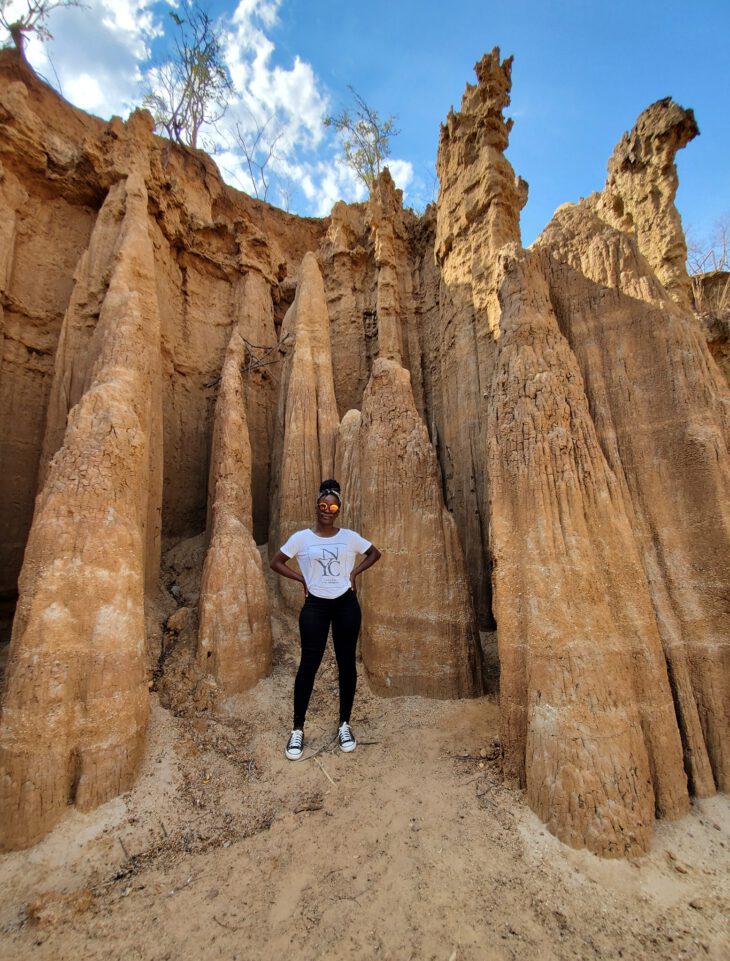 The Malape Pillars are natural formations found in Lilomba, Machinga in Malawi, with the traditional authority being Nsanama.

Once upon a time, Malape Pillars used to be a sacred place. It is believed that spirits used to live there hence elders would go with offerings. It was a dangerous place that if anyone would go there anyhow, without following protocol of the place, they would never come back as they would be turned into spirits.
Elders from Lilomba Village say that their parents used to call this place Kutchalitchi cha Mulungu (Church of God) because of what used to happen at this place.

Why are they called Malape Pillars?

This name came about as the first thing visitors to the place would do was to utter in disbelief (amadzuma) as they were amazed at what they would see and hear. In yao language kudzuma is kulapa, hence the name Malape.

Some of the things that people claimed happened at Malape Pillars

No kids were allowed to go to the pillars, only elders (makolo okha okha amvula zakale) would be allowed to go to the pillars with the guidance of a leader who was in charge of the offering giving ceremony. The place used to have a wide range of wild animals as it there was a dense forest back then. As soon as the elders got inside the pillars, it would get misty, after a few steps, it would get clear and the elders would see mphale (maize) put out in the sun to dry and Nsima in clay plates. They would hear voices, get asked questions of why they are visiting and respond, they would engage in dialogue yet never see the faces.

Do we still have spirits at the Malape Pillars!?

The answer is NO!!

The spirits vacated the place as people started to frequent the place, they used to make noise and would visit anyhow, which the spirits did not like. They like quite places and the place was under threat. The doves that acted as guards of the place as they informed the spirits of anything. The spirits lacked peace and they moved out of the Malape Pillars.

Mervis’s point of view as a travel enthusiast and patriot

The Malape Pillars are beautiful and unique, one of the uncommon touristic sites in Malawi, ypu would think they are manmade. I have been there thrice, my first time to visit was in 2019 using the Zomba Namwera side, my second time was in 2020 using the Ntaja road side (much easier compared to the Namwera side as the road is not so bumpy), this year’s visit was my third.
As beautiful and unique these natural features are, there’s need to work on the road network to ease access. The roads are in a terrible condition and the bridge that leads you to the pillars is dilapidated. At the moment, the committee that was set up to oversee the Malape Pillars affairs charges k3000/3$ per person as entry fee to the pillars. This money goes toward community developments. However in my recent visit, they expressed great concern in the low number of tourist’s they have been receiving. From this explanation, you are able to tell that this place is an important part for the community, hence the need to intervene and develop the place by devising proper structures and mechanisms to help the community, district and Malawi at large.

If you want to contact me about anything relating to touring Malawi, I am your go to guide, you can email at [email protected] or follow my facebook page, Travel with Mervis. I look forward to hearing from you.