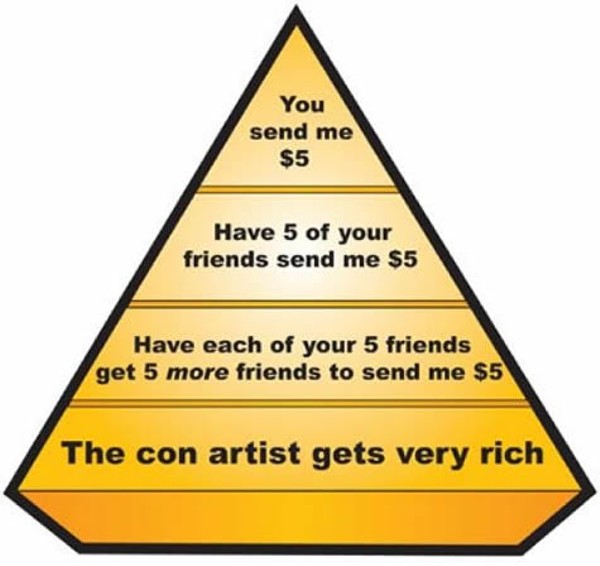 Of Pyramid and Ponzi Schemes, in Nyasaland

A week isn’t going by without hearing how someone has been dragged to the police in a pyramid-scheme related case. The Reserve Bank of Malawi stepped in to issue a warning against getting involved with the get-rich-quick scheme.

Someone, somewhere, is probably thinking “Ah, if seemingly educated Malawians can willfully take part in a pyramid scheme then they can definitely be interested in a Ponzi scheme.” And I don’t blame them for their train of thought. It’s completely rational (albeit twisted).

(This can’t be stressed enough) People need to be careful with where they ‘invest’ their money, especially about pyramid and Ponzi schemes. The two are similar in terms of modus operandi but they differ in structure.

What is a Pyramid Scheme

A product-based pyramid scheme comes in the form of a direct sales opportunity. A distributor recruits 5 sales people each paying $100.00 for a start pack of products to sell. S/he gets 15% of every starter pack sold plus another 15% of every product that their recruits sell (including more starter packs).

The recruiter goes “don’t focus on selling the products because you can make more money quickly by recruiting more people. Red flag. The crazier ones take it up a notch by showing the new recruits the good life that’s waiting for them once they recruit enough people.

This seems plausible in theory but the issue is that a product-based pyramid scheme usually involve items that don’t do well on the market or have VERY small profit margins. The members are then forced to recruit new ‘investors.’

And in a small country like Malawi the market quickly becomes saturated. Everyone and their aunty is telling you about this “great opportunity” and trying to sell you age reversing concoctions.

Meanwhile, the people at the top of the pyramid take in millions in commission from everyone joining downstream while you bottom feeders are stuck with products nobody wants to buy. So many multi-level marketing companies being shoved down our throats right now are thinly veiled pyramid schemes.

On the other hand, no product or service is sold in a naked pyramid. Here’s how it goes:

Imagine if making money was this easy? Unfortunately here lies the problem: let’s assume the first 10 friends each manage to recruit 10 more members. Those 100 new ‘investors’ each need to recruit 10 people to make $900.00. This means, collectively, they need to find 1,000 new recruits.

And let’s assumed they manage to pull it off, the next level of the pyramid needs to recruit 10,000 to make money. Ultimately, there won’t be enough new members at the bottom as the pyramid grows. This is when the whole things crashes and people start suing each other.

What is a Ponzi scheme 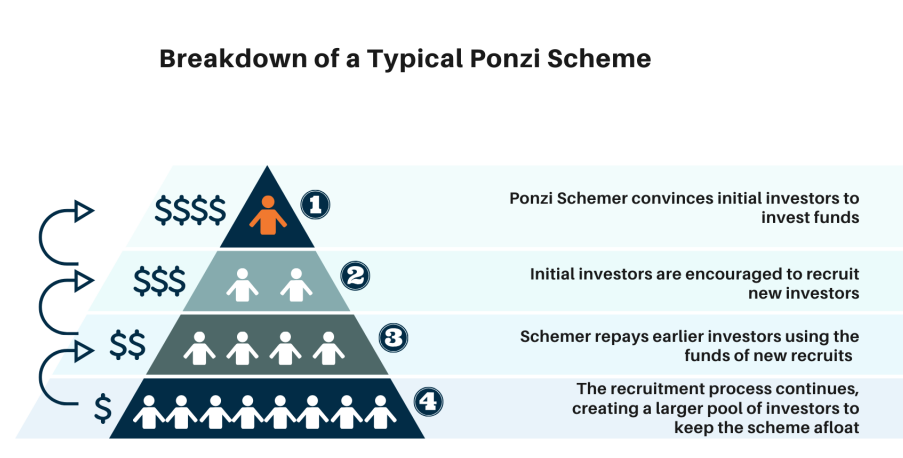 A Ponzi scheme is similar to a pyramid scheme but they’re slightly different. In both scams, existing members are paid by money that comes in from new recruits. The main difference is that in a pyramid scheme, the investors KNOW that they can make money only if they recruit new members – they are willing participants. They become part of the scam.

However, investors in a Ponzi scheme are tricked into believing that they are earning profit from their investment. This is an outright fraud.

Ponzi scheme is an investment trick that was coined a century ago when Charles Ponzi swindled thousands of people after they had invested in his postage coupon scheme. Its original name is the Robbing Peter to Pay Paul Scheme.

Instead of making any type of investment, Charles Ponzi only chopped the investors’ money. He was able to sustain the scam by getting new investors and giving some of their money as profit to earlier investors.

Seeing the profit come in, the earlier investors would then convince others to also join Ponzi’s scheme. The scam grew to the point where it could no longer attract enough new members to pay off the ever increasing number of new investors. He eventually got caught and the whole thing crumbled.

The most (in) famous Ponzi scheme was the one Bernie Madoff run for almost 20 years in which he stole billions of US dollars from people who’d trusted him with their money. He is currently serving a 150 year prison sentence in the US.

So next time someone (especially those you haven’t heard from since kindergarten) calls you up for “this amazing opportunity” that sounds too good to be true, don’t fantasize about buying mansions and dating Boity, just RUN!

If something sounds too good to be true, it usually is.